The short version: Skip this game. The long version: Read the review. 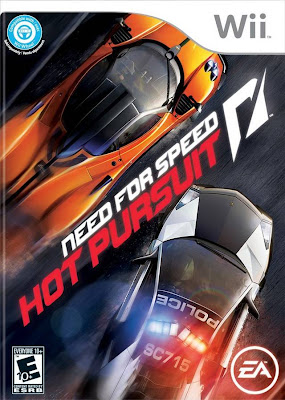 Need for Speed Hot Pursuit is the next installment for the PS3, 360, PC and Wii. The Wii version takes a different route than other versions as it sticks more into the arcade side of things. NFSHP plays more like Need for Speed Nitro. Instead of going for a more realistic feel they try to go for more of an Arcade feel that did not work for Nitro and it definitely doesn't work for Hot Pursuit. The cop chases are still there however the more you play the more you'd wish you were  be in jail rather than playing Hot Pursuit Wii.
The goal of the game is to take over the city by areas. Each area has different modes of gameplay such as Hot Pursuit, Eliminator, Rush Hour, Interceptor and Time Trial. Hot Pursuit is a race around the city with AI cops trying to arrest you. It isn't that difficult to run away from the cops or just smash into them, you wonder what the city does with the tax payers money. Eliminator is a timed race where the last player is eliminated first. The number 1 spot is a must or you risk getting eliminated early in the race. Rush hour is the same as eliminator only more cars are coming your way. Time trial, you must beat your best time and Interceptor puts you in the role of a cop car trying to catch speeders breaking the law.
Cars don't receive physical damage. smashing into other cars or another car smashing into your car can send your car flying 30 feet into the air. This game feels like an N64 version of Cruis'N USA with better graphics and licensed cars.
There are power ups that you can get while driving that gives you a boost. You can turn your car into metal or drop oil to get rid of anyone behind you etc. These power ups help you on your way to victory but are not required as you can just smash into cars and knock them off course.
Graphically the game is pathetic. The whole city is colorful as well as the cars. It's obvious that they were aiming for a childrens game. Car's do resemble their real life counterpart but look pixelated. The Wii is suppose to be a better version of the Xbox and is 1.5X more powerful than a gamecube. I've seen Criterions work on: Burnout 3, Eliminator and Revenge on PS2 and Xbox. Gran Turismo 3 and 4 are on PS2 and those game's look awesome by PS2's standards. Forza for the Xbox was an amazing game. All these games are graphically superior to Hot Pursuit on the Wii. How did they fail at this. There is no excuse not to have a better game on the Wii. Not to go far Need for Speed Underground 1,2 and Most Wanted were on Gamecube. Why not just port that game over to the Wii, add a few elements of Hot Pursuit and call it Hot Pursuit.
Graphics are bad but the sound track is worse. Not to mention the sound effects. Who did they have write their sound track? the same guy who writes the music for elevators? The car sounds sound generic. Lighter cars will have a higher pitch and heavier cars have a lower sound pitch. Crashing into another car sounds like someone just clashed 2 types of metals together. Whatever happened to EA Trax? Once again this is the same company that worked on Burnout 3 and that game had better music and sound effects on the PS2 which is less superior than the Wii.
Controlling the game isn't as bad unless you hold the Wii-mote to the side a la Mario Kart If you have the wheel and are used to it. If you find that method annoying then you can connect the Nun-Chuck and control it removing any form of motion controlling. It is a lot better for casual players but Playing hout Pursuit on any other console than the Wii is way more better. Controlling cars is simple but the car physics and AI is what brings the game down.
Besides Time Trail there is 4 player split screen to play with your friends. There is no online gameplay but the online feature sucks on the Wii so it's not really a negative. Playing single player should last a few hours if you can last that long playing this version. After unlocking all cars and upgrades there is really nothing to go back to.
Closing Comments:
I mentioned other games Criterion has worked on a lot but thats because there is really no excuse for Criterion to bring us this piece of junk on the Wii. Graphics sucks, Gameplay sucks, Physics sucks, Music sucks, and AI Sucks. Hot Pursuit is available on PS3/360 and PC there is no reason to get the Wii version. Hot Pursuit Wii should not be played by anyone and if you are looking for a racing game for a loved one get them a different version of the game or spend it elsewhere.
Gameplay: I have no words to describe how bad the gameplay is. 2/10
Graphics: Bright and colorful but cars could use more detail. 5/10
Sound: Bad music and bad sound effects: 1/10
Performance: No lag unless playing multiplayer. Overall decent performance. 6/10
LifeSpan: Several game modes and 4 player split screen brings hours of entertainment if you have the patience: 5/10
Total Score: 38/100
Posted by Donny De Leon