The console version may have been canceled, The iOS version is now available at the App Store.


NBA Elite is a basketball game for the iOS based on the console version which was cancelled this year but EA hopes it makes an appearance next year. It tries to be a real NBA sim, in which you select you team and proceed through season mode to win the NBA Championship.
A new mode introduced in NBA Elite is 3 point shootout in which you select your very own members of the NBA from any team. Your goal is to score as many 3 point shoot outs as possible from different angles. You are given a certain number of balls and a certain amount of time and you must go through all of them and score before the timer runs out or if you run out of balls. 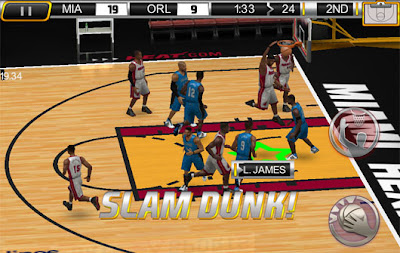 Season mode is where the fun lies. You get to select your team and proceed to challenge every team on the NBA to be crowned champion. Each team has their own sets of stats which defines individuality against other teams. Each team member has their own specialty spot which is highlighted by a red circle that turns green if you are in that players hot zone. The circle doesn't have to be green and it ranges from different colors depending on how far away you are from the players comfort zone. When you shoot the ball you will notice 2 icons that move from left and right to center and past that. If you can align both symbols then your chances of scoring are higher. However just like the circle the symbols also have to be green. Shooting in a red zone is like playing Russian Roulette with 5 bullets and only one empty barrel. Chances are you will miss the shot but on a rare occasion you will score. 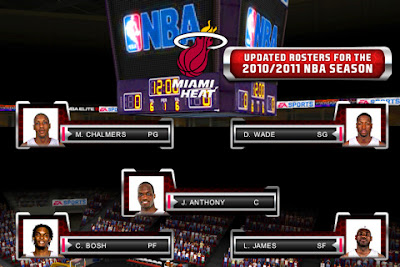 If you don't like shooting you can also go for a Slam Dunk or an Alley oop but you have to be at the right position in order to execute this. Standing too far away will give you the shoot icon and because it moves very quick you will not get enough time to align your shot. Scoring will bring up letters which read different depending on how great your shot was. This adds a little bit of arcade fun similar to that of NBA Jam or NBA Showtime for the N64 and Dreamcast.
While this may be a basketball game where you challenge other teams, you cannot challenge your friends to a friendly match. Most games experiment with Wi-Fi and bluetooth multiplayer and I think this is something a game like this needs whether it's on the iOS Devices or not. 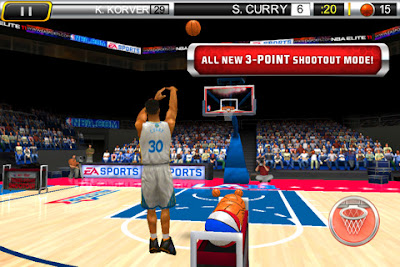 NBA Elite offers great NBA gameplay but it does a have several shortfalls. For one the touch controls can get a bit annoying specially the D-Pad. The D-pad covers 1/10 of your screen and can sometimes block an opponent or even your player. You cannot see what they are doing and if you move your finger to check then the opposing player can quickly move. The D-Pad can also move around the left side of the screen depending on where you place your finger. While this may be ok for some it doesn't give you the option to just leave it in place. 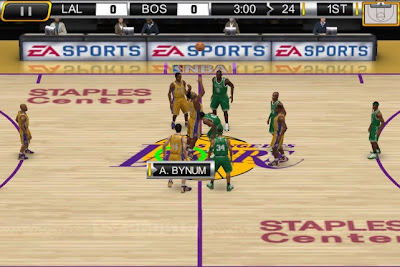 Another problem is the AI. While you are working on stealing the ball or during a rebound your teammates will just stay standing there. They will not jump or at least try to recover the ball. All they do is take up space and block your view while trying to recover the ball. Sometime the game will lock up to a single player you are controlling and leave the AI to take the ball only for it to be countered by the other team.
NBA Elite is not without its bug problems. There are times when the ball will go outside your opponents courtside and you will have to take it out on your courtside. Also you would think that if a player catches the ball outside it would be an automatic out of bounds. No, not if the player is floating and magically appears in the middle of the court heading towards your basket to score a point.
Another problem that I had was the game trying to connect to a Wi-Fi connection when I moved away. I tried turning Wi-Fi on and off and try exiting the game but the error message would not go away. The game doesn't even support Multiplayer why does it have to rely on Wi-Fi. I had to turn off my device in order to get it back to normal again. 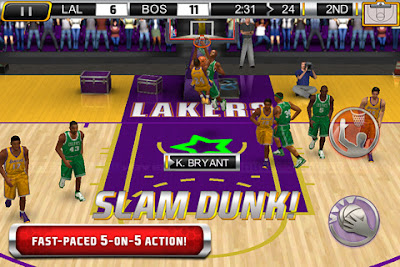 Graphically the game is decent although I prefer the character models in NBA Live 10 for the iOS which sadly is no longer on the App Store. The game however is smooth as there are no frame rate drops or lags but the animation is very choppy. Players will move around like if they were carrying cinderblocks on their feet. Mix that with crappy AI and a few bugs and you'll be lucky if you manage to beat the other team.
Scoring is not as you'd expect it to be. The max number of points I've seen a team get is 38. Yes 38. The game will sim through other teams in season mode and it seems the computer has a hard time scoring as you do.
The sound is actually pretty good on this game. There is an announcer but he's not constantly calling out your errors or strengths. The announcer is limited in what he says though and it can get repetitive at times. The crows is not as great and NBA Live though. From time to time you will hear a few cheers it doesn't sound as great. But the quality is on the sound effects is great as there is no distortion.
One great advantage of Elite over Live is the multitasking. In Live if you exited your game and went back to it you would have to sit through a loading screen before returning to the game you just paused. In Elite as soon as you exit and you go back in the game will return straight to where you left off. No waiting at all. 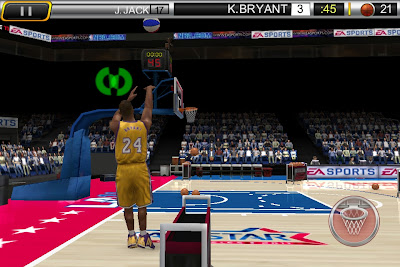 Season mode will keep any user entertained but the lack of multiplayer for a sports game is what keeps you from playing it constantly. However for $4.99 as of writing this review it isn't that bad if you're looking to take an NBA game on the go. If you don't want to do season you can always do exhibition and play out your favorite games from the past or rivalries going on today. But after mastering all those modes you are stuck with a game that just takes up space.
Closing Comments:
NBA Elite takes a few steps forward in this genre of games for iOS devices but it takes them in the wrong direction. Elite does improve on Live but Live feels like the better game. The addition to the shooting icon is great as it gives you a better chance of scoring. However the bugs and bad control configuration will definitely keep you away. Buy this game is you must have an NBA game in your pocket otherwise skip this game or wait for a sale.
GamePlay: 6/10
Graphics: 6/10
Performance: 6/10
Sound: 7/10
LifeSpan: 4/10
Total Score: 58/100
Posted by Donny De Leon