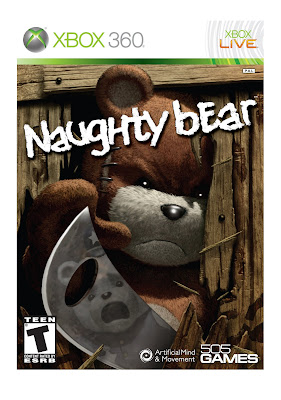 If Sam Fisher from the Splinter Cell series was a teddy bear I think he'd resemble Naughty Bear. As Naughty Bear you get to do it all in Perfection Island: Hide, Attack, Beat, Destroy, Laugh, Scare and Kill other bears for making fun of you. I still wonder how this game got a T rating but oh well.
NB wasn't invited to a party and was laughed at when he showed up with a gift to the party. Now NB is taking revenge for the rejection and humiliation he went through. As NB you can use items such as: Machetes, Baseball Bats, Sticks, Bear Traps, and of course your own fists as well as a good old handguns. You can also kill bears while they are distracted doing something such as: getting a weapong, trying to get out of a trap and get them out f a vehicle and smash their heads or their spines. The main goal is to kill all teddy bears in the area by beating them to death, blowing them up, stabbing them or shooting them. You can also hide out in the bushes and wait for the bear or bears to turn their backs and then just come out and beat them to a pulp. Each weapon has a different animation for NB to perform. A machete will perform a brutal stab through the torso, a baseball bat will perform a head smash etc. The most brutal way NB kills an enemy is by setting up a land mine which any teddy can get stuck in, then NB goes behind them, kicks them in the balls and they blow up. 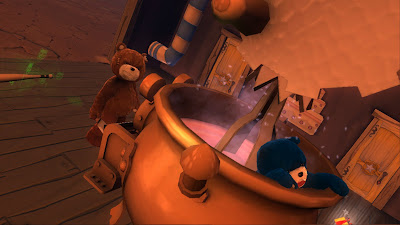 Defeating enemies isn't all that hard which is where NB falls short. Hitting enemies a few times will result in them trying to run away but get tired after a distance which is very easy to keep up with. If the enemy notices a dead enemy on the ground even if NB is in front of them they will get distracted easily. Not all enemies are easy however, if a teddy manages to get away they'll bring help from the police. The cops aren't easy to defeat as they will shoot NB from a distance and don't get distracted as easily. If the Fuzz doesn't get you then the Ninja and Zombie teddies will. Another one of NB shortfalls is the auto lock feature. There is none. While keeping up and fighting with enemies is easy, no auto lock will make it a bit challenging trying to keep the camera locked on to them . 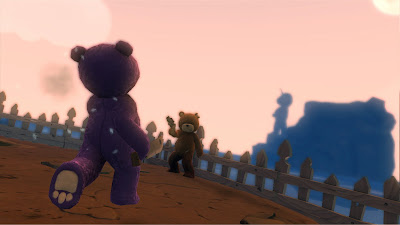 As you continue the story there will be different reasons for NB to attack the village. Most of them having to do with someone from the Village trying to get rid of NB. Some missions are easy others are challenging, others you never wish to play again. While killing is the main point of the game, you must also ear points to earn trophies which are used to unlock levels. Gathering points also unlocks customs which NB can use to his advantage. Each custom and hat that is unlock raises NB's stats as well as letting him do something special that NB normally can't do on his own.
The style NB uses is that similar to any other kid game like Viva Piñata, Yoshi's story, etc. In the beginning of the level there is a narrator similar to that of a kid's programming show where they explain what is going on and what you should do about it. Because NB is about killing cute fluffy bears this style works out great. Not everything is perfect in Perfection Island though as there are bugs that plague the game. The most plagued issue is the clipping on items and NPC's going through half the door when they are opened. There is also a slowdown when NB switches from area but this is just loading the next level and really doesn't affect what goes on screen. On a rare occasion the game will freeze which sucks even more if you are doing a mission you hate. I think the developers should have taken a few months extra to try and fix this issues or at least release a patch that fixes them. NB isn't the best looking 360 game out there but I think for the style it uses it can get away with it but that doesn't mean that you won't notice the game from time to time. 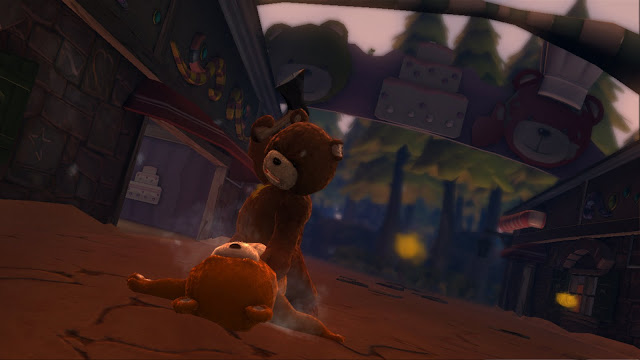 Because there is no auto lock feature and the camera keeps resetting itself the second you move it to get a better view, controlling NB can be a bit difficult. There is also no first person view so getting around or looking for presents to burn is difficult even though the level is very small. NB is suppose to resemble a hack and slash game so fans of those genres will have no problems controlling NB. As for the rest of us well keep dropping our weapons by accident and getting our asses kicked until we manage to pick them up. I always keep getting confused between the attack and the drop button. The Triggers are only used to kill someone in stealth mode or to shoot someone which you probably won't do 75% of the time. 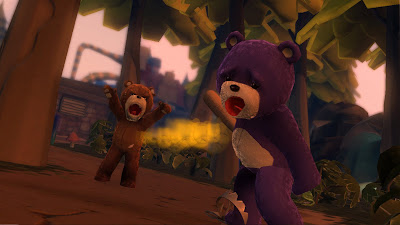 Online multiplayer is fairly decent although it's nothing that other games haven't introduced already with a bigger amount of players. Multiplayer only supports up to 4 players via Xbox Live of PSN. The 4 modes available to play online are: Assault, Cake Walk, Golden Oozy and Jelly Wars. Assault is where you must destroy other team's unibear statues and protect your own. Golden Oozy you must use the Oozy to defeat other bears similar to that of Deathmatch. Cake walk; you must hold the golden cupcake the longest in order to win. Jelly Wars: A team of bears must bring jellies to the mixing machine while avoiding Naughty Bear. While multiplayer may be fun for a few minutes you'll soon be bored with only playing 3 other people. 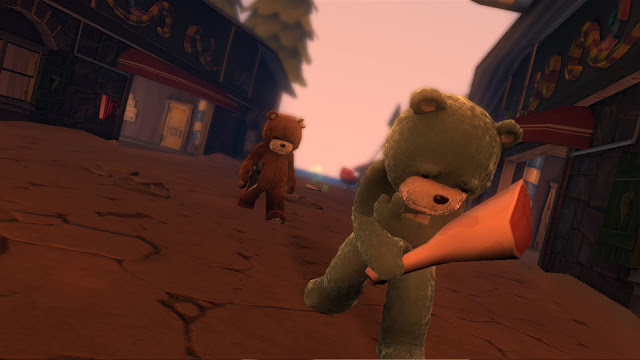 Closing Comments:
While Naughty Bear is a great concept it does have its shortfalls. There is a lot of repetitive gameplay and online multiplayer isn't the best as you can get bored easily. However the violence in the game is really fun and killing other bears doesn't get boring. This is definitely a game you do not want to get your sweet little daughter. Maybe you demon son but definitely not your angel. Even if it's not a present for a kid any adult who enjoys these types of games or just destroying fluffy teddy bears will definitely enjoy Naughty Bear.
Gameplay: 8/10
Graphics: 7/10
Performance: 6/10
Sound: 7/10
Life Span: 7/10
Total Score: 70%
Posted by Donny De Leon