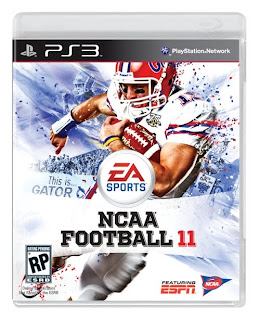 NCAA football 11 is one of the most fun games you can play this year. I wish I can leave it at that but unfortunately I can't. There are many improvements to NCAA football 11 both offline and online that will keep you on your seat for months to come, Specially if you follow college football. The game follows the same formula as previous titles in the series in terms of gameplay. Choose your play, Hike the ball and throw the ball to an open receiver and/or run like hell. Seems simple right. Not when you have a team with great defense trying to stop you. That's where the excitement comes in. Each team has a unique offense and defense and you must think careful and  strategize your play.  When the ball is thrown you have a few seconds or less to find an open receiver and get rid of it or risk getting sacked and losing yards. Of course this is just the basics of football, now let's dig in to what makes NCAA football 11 a good game. 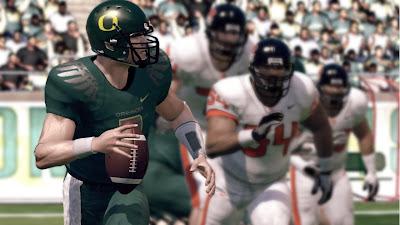 NCAA 11 puts you in control of all the action that goes on in college football. When playing career mode, you get to chose your team and lead them to victory. You can choose your team from 120 college football teams from around the US nation and play in real life stadiums. NCAA gives you all the control but that doesn't mean you're all alone in the field. The AI in the game is some of the best that I have seen in any sports game. You don't have to be controlling the players for them to realize when to stop the opposing team or catch the ball to make an interception. That is also true for the AI on the opposing team.
Erin Andrews hosts a segment called Road to Glory. It's more of a game type than a segment actually. This mode allows you to create your own player and follows your player until graduating from college. One detail that surprised me about Create a player is all the locations listed where your player can be from. He can even be from Compton (Represent Homes) or any other city you choose of your liking. Of course when playing this mode you are giving up a lot of game freedom. What that means is that you are limited in plays and you are limited to only using your created player in the position you choose for him. This can be boring at times whenever there is a play that takes a while because all you're seeing is someone running the ball while you wait. Of course the game is simulated whenever your player is on the bench which can speed things up. 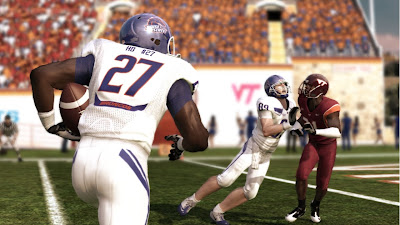 Career mode gives you all the freedom of the NCAA. You can play any player and any team you choose as well as recruit players to your team from around the nation. You are given a total of 10 hours of recruiting time and you can use that recruiting time however you like. Each portion of the recruitment will deduct time but that time is used to convince the player to join your team. The extra players always come in handy when your main QB gets injured. Of course if it's a minor injury you as a coach will have the option to continue to use said injured player on the field but doing so will only tear your player apart. If you choose to sit him down every now and then status updates will be given on how he's doing with his injury. Of course trying to recruit a team member is like playing the Russian Roulette as you spend all that time trying to convince said player into joining the team only for a better school to come and snatch him away. 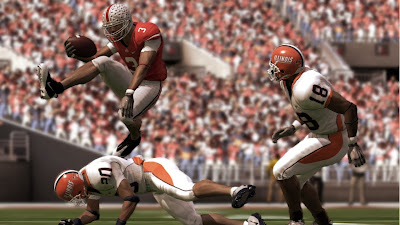 Online is everything for NCAA football 11. You can go online and compete on friendly matches as well as compete against other players and with your Dynasty account which can be accessed anywhere including on your iPhone, you can do things like post news stories, schedule matches, recruiting and check up on your team and how they are doing. All this plus highlights from ESPN are available on NCAA football 11. 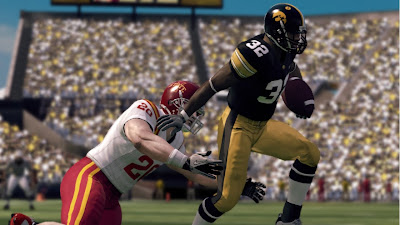 Visually the team behind the game did an excellent job specially with the camera work. While you will notice a slight delay or something out of proportion it doesn't compare to what comes up next. Replay's alone are worth it. I always love to have a receiver catch the ball in the air so that he can get tackled by the other team and watch the replay of said event's. It's really fun to watch your team catch, throw, tackle and run with the replay system. The players animation move really smooth and there is hardly any slowdown even with hell going on the field. Although most of the fans are in 2D in the background from time to time the camera will span out and show 3D fans doing some motions like: Disappointment, Anger, Cheering etc. and your cheer leading squad will be doing their routine off the field as well. The game is suppose to run at a resolution of 1080p but by default it only runs at 720p. In order to run it full resolution you must change the consoles setting to remove 720p and 1080i and have only 1080p as the default setting. 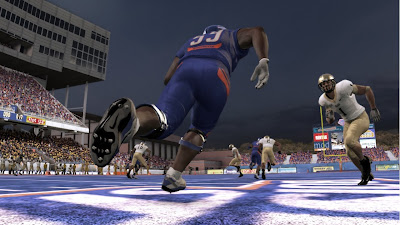 It's not hard to figure out how to play NCAA football. Anyone can pick up the controller and play, there's even a one button mode for beginning users where pressing the X button can do everything from throwing the ball to sacking someone to the ground and speed comes automatically. To really master the game you must strategize pick the perfect play and have patience and this only comes with years of practice and attention to detail.
Commentators Herbstreit and Nessler bring the game to life but can be very repetitive. Although you don't really have to pay attention to what they are saying it does add to the real life experience of playing the game and when you do decide to pay attention you're sort of glad they're there. 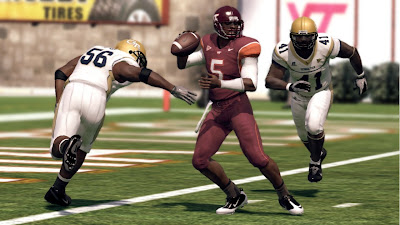 Final Comments:
NCAA football brings new features and updates the current ones. This is a must have title for fans who follow college football to play as their favorite teams. As for beginners this is a fun game that is easy to play but still requires practice and time to master. There's so much to do in this game and it will take you a long time just to complete. Even after you finish the season you will find yourself going back to challenge friends or opponents online or even brush up on your skills for next year's release. 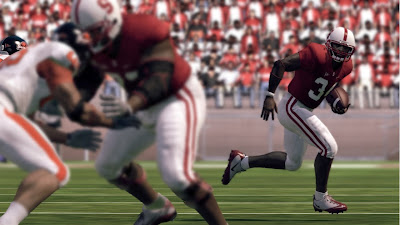